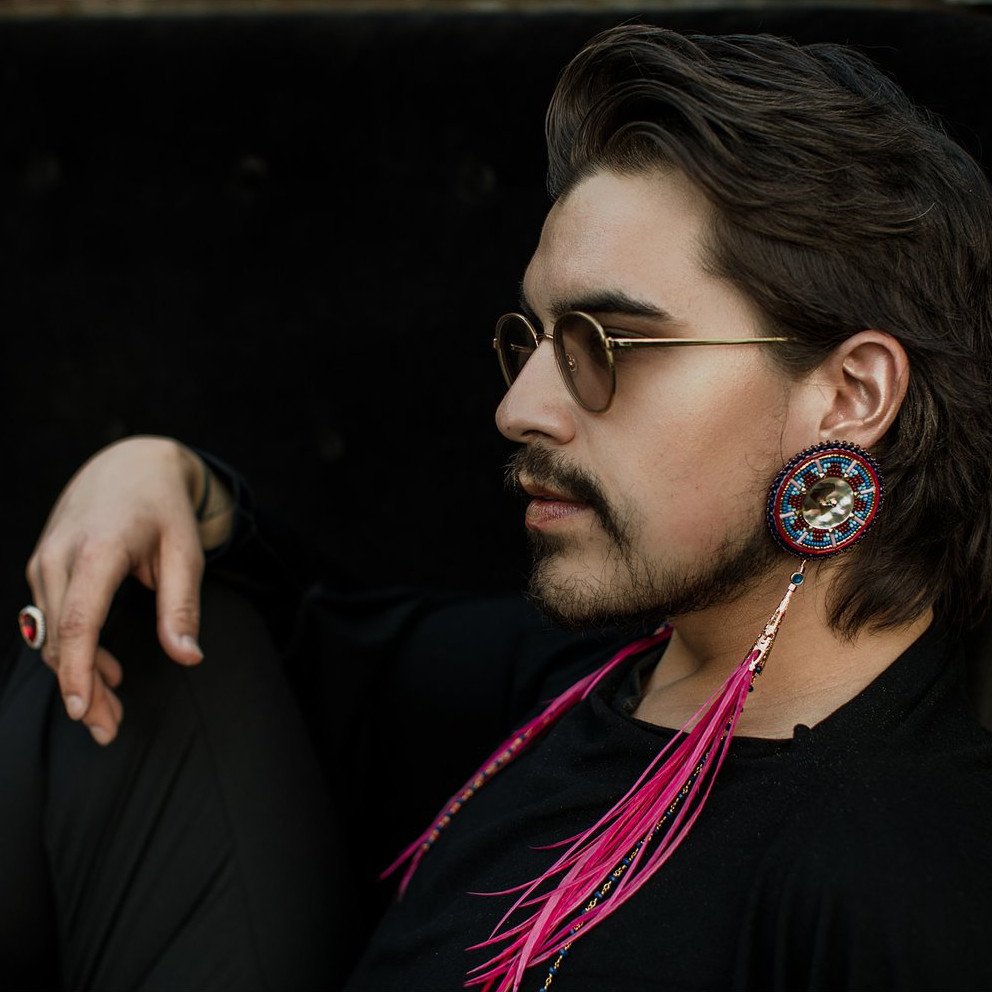 Notes on Indiginegativity: An Addendum by Joshua Whitehead

You dig through your library and find Wacousta sitting in front of you, to its left, The Edible Woman, and to its right, In the Village of Viger; stacked atop these: Street of Riches, Bear, Life of Pi, Roughing It In The Bush, Wild Animals I Have Known. You open any of these books and see yourself, think, “here I am, god it feels good to be Canadian”—even if these authors appropriated Indigeneity to gift you a feel-good story (think Beauty and the Makwa), even if their words were crafted on colonized land, even if their mirrors are adorned with quill and bones (that’s paleontology). I open these books, novels I’ve been forced to study for three degrees over eight years, and see a stark-hot whiteness, see a wrought NDN like a stamped, trampled piece of sheet metal punched again-again-again into a shapeless mould. I throw these books into the corner of my room and behind them find: Tekahionwake, Joy Harjo, Maria Campbell, Rita Joe, Beth Brant, Tomson Highway, Sharon Proulx-Turner, Lee Maracle, Katherena Vermette, Rosanna Deerchild and think “here I am.” What makes Canadian literature a thing? Who is CanLit? Is it not a nation-building project? Then too is it not a settler colonial project? I think of Margery Fee who argued that literature is a land claim. Where do I fit in? Where do we fit in? Is there room in CanLit for the Indigenous? And, perhaps, the more important thing to ponder is: do I even want it?

I’m writing this in response to The Writers’ Union of Canada and Hal Niedzviecki in particular. You may think I hate you, I don’t, but I am deeply troubled and upset by your contributions. You, Hal, are wrong—appropriation is real. Tell me how you could write something after each of your contributors spoke vehemently about appropriation? I know you’ve read my piece because you edited my calling out of Anita Daher naming TWUC community a “tribe” and changed Indigiqueer to Indigequeer (both without my permission may I add). I can’t tell if that’s just ignorance or laziness? I’ll leave that for you to answer. While you wrote “Winning the Appropriation Prize” I scrolled through my social media feeds and saw appropriation working at its finest: Tanya Tagaq arguing against a white boy band named Get Inuit, I see Amanda PL capitalizing off of Norval Morrisseau, see Zach McGowan starring in Ni’ihau—tell me what isn’t real about that? How does this continue? I see this happening everywhere, every day, and yet we keep on getting the recycled excuse, “I just didn’t know.” That may be, but do better, do your research, do—my two degrees tell me I had to. That excuse isn’t enough anymore. Ignorance is a tactic best maintained by privilege and while it may be bliss for you it’s a death-sentence for me; bliss is a space of comfort for yoga-posing-eat-pray-loving white settlers who enjoy privilege as if it were a resort buffet, what’s bliss about a bought space, an inheritance? Again, it’s not enough. Ignorance is not indemnity and no longer stands as an apology I’m willing to accept—do your homework before you come for me, before you enter this gladiatorial arena incited with TWUC since ‘93. If ignorance is a buffet, well, it’s a dish best served dead. I’m sorry if my Indigeneity is indignity to you, a shame, but hey, that’s a gift from me to you. Shame was an energizer for me to come into myself—maybe it’ll work for you too?

Settler colonialism has stolen twenty years of my life and I attribute this all too the ongoing appropriative and assimilative strategies of this nation-state and its systemic machinations. Two decades I hated myself because of appropriated images and mediations: NDNs are lazy, drunk, addicted, poor, ugly, meaningless, vanished, diseased, dead. And yet, here I stand and write, vicious and vivacious. Appropriation hurts, it bears repeating, it’s the machine that reiterates settler colonial ideologies. Appropriation is the iconoclasm of colonialism; the image that you see when you think of “Indian” is how you’ve been programmed to see me, feel me, hear me, hate me. Appropriation is the stamp of approval that acknowledges and allows the rape of our women, the destruction of our land, the invisibility/inaudibility of our stories. Appropriation is what gifted you the very canon of CanLit. I’ll be damned if I let you take twenty years from my niece, cousins, the youth of my generation—you can keep my time but you’ll give them theirs. And you may want to call me militant, savage, angry, feral, romantic—perhaps that’s one gift of appropriation, I can adapt it and become adept at playing the very games you’ve set out for me. Funny, I think, who needs a sequel to Blade Runner when we’re living in that world already?

Sometimes I feel like those totem-transfer women in Mad Max: Fury Road all pining for water, shambling over its lascivious salivations, a disappearing person in an apocalyptic wasteland, the water the real heroine of the story whose only lines of dialogue are: witness me. I feel like Mystique in X-Men telling Senator Kelly, with her legs wrapped around his neck, “you know, people like you are the reason I was afraid to go to school.” Appropriation hurts and if you say you didn’t plan for it to turn out this way you’d be lying. You, who think that only one world exists; you who play life like a billion dollar playboy swirling Anne Hathaway on your arm. Here I feel like Cat Woman asking, “Do you ever wonder how you could live so large and leave so little for the rest of us?” Or maybe I’m more the Anne Hathaway that disappeared into oblivion behind the shadow of Shakespeare? Who knows? A storm is coming and as Tanya Tagaq has forewarned, “retribution will be swift.” Buckle down, CanLit is burning, has been for quite some time, I’m here waiting to relish in its ashes—trust me, I know fire, I’ve been burned by ceremony already. I’m ready for the newness.

I ask myself what are the politics of reading and writing? You may want to tell me that good literature is apolitical, that theory and identity impede and intercept a good story. I want to tell you that all literature is political, that being apolitical is a type of politic, that any lack of the political is a politics of comfort. You are comfortable because you are blanketed by your ideologies and that literature on your bookshelf is your guarantor. I am here to unsettle you, a good story is a wave that ripples, unshackles earth from cement foundations, cracks open rocks, splits the ego. I turn back to my own theorizations on Indiginegativity that I published in Write. I’ll let the theory eat and show you resurgence in a handful of words. I cry again, pool energy into my clavicles, drink the rue of my own lamentations and sheath myself in lamination, I survive to resist another day.

You may think that passivity is weakness, but I repeat, crying is an act of aggression, tears are rivers that etch space. If, as Lee Maracle taught me, water owns itself then so too do our stories—I am only its safeguard, we, it’s vanguard. My stories come from the land, terra who owns itself, and my protagonists are my sovereign children. While it may be said I own them through contracts and copyrights, the land owns those characters, I borrowed them from her, I am a story protector. Perhaps that’s the difference between Indigenous literatures and Canadian literatures—we don’t own our stories, they own themselves; we don’t publish for canonicity, we publish to flourish, we circulate because we have to see ourselves in order to know ourselves. I return to passivity over ownership again. Here’s a Two-Spirit lesson from me to you: I’ve learned through queerness that I can be a power-bottom and here too I’ll be a power-leader.

I know what I am writing even if you don’t: I’ve thrived and survived twenty-eight years in this death game. #Canada150 is less a birth day, more a dooms day—we are the surveyor of its ruins. If your literature has run dry, entered its drought, don’t come to us for new kindling, that’s your fire to keep. You want to seek out “truth telling” through appropriation? Here it is: you’ve already won your appropriation prize—that’s 150 in the making. Happy birthday, here’s your cake, eat it too. I’ll keep crying, orating, waiting for that pool, for Sky Woman to fall from my hair, splash into a clavicle filled with saltwater, make a world, make space for me; I’ll keep writing back, against, carving space again, again, and again. Hell, I feel like the NDN Del Griffith with all you protectors of appropriation and Niedzviecki: if you want to hurt me, go ahead, I like me, my people like me, my characters like me, and if you need a drop of blood or a browning bruise to authenticate your story, tell me, I got pain archived in spades—but don’t expect it easy or for free.

See, my fingers are crisped, my ducts spark flints, CanLit is burning and has been for quite some time but our words are galvanized and reinforced, Indigenous stories emerge from the ash. Here’s what I found in the aftermath: I am not CanLit, my words don’t recognize canonic or tectonic borders, I have all of Turtle Island to nourish and energy with my story. I am not CanLit. I am an Indigenous storyteller writing for Turtle Island, I am Indigenous Lit. I wonder what that looks like and see Daniel Heath Justice already surveying its land mass with his #HonouringIndigenousWriters, I see the work that Gregory Scofield has been doing for the last thirty years, I see Lee Maracle and Thomas King, the grandparents of Indigenous literatures, dancing on the horizon. I remember the words of Zitkala-Sa, William Apes, Chrystos, Leslie Marmon Silko, Paula Gunn Allen, Gerald Vizenor, hear them now in Tommy Pico, Cherie Dimaline, Alicia Elliott, Erika T. Wurth, Gwen Benaway, Billy-Ray Belcourt. I am first and foremost from Peguis First Nation, Treaty 1 territory, the home and heart of the Metis Nation—all of this before Canada. I am the red river that splits apart the land, I am the strait, I am Manitowapow, the drum-heart-river pulse that intersects your borders, I am the strait that isn’t straight but veers into the United States, beats into the heart of the Americas—that’s Indigenous Lit and there’s nothing linear, temporal, straight about it. I asked you where do we fit in? Is there room in CanLit for the Indigenous? I guess I do not want it because we need our own space. CanLit cannot do us justice because Write sounds too close to white.

Joshua Whitehead is an Oji-Cree, Two-Spirit storyteller and scholar from Peguis First Nation (Treaty 1). He is currently working towards a PhD in Indigenous Literatures and Cultures at the University of Calgary (Treaty 7). His debut book of poetry, full-metal indigiqueer, will be released this fall from Talonbooks.